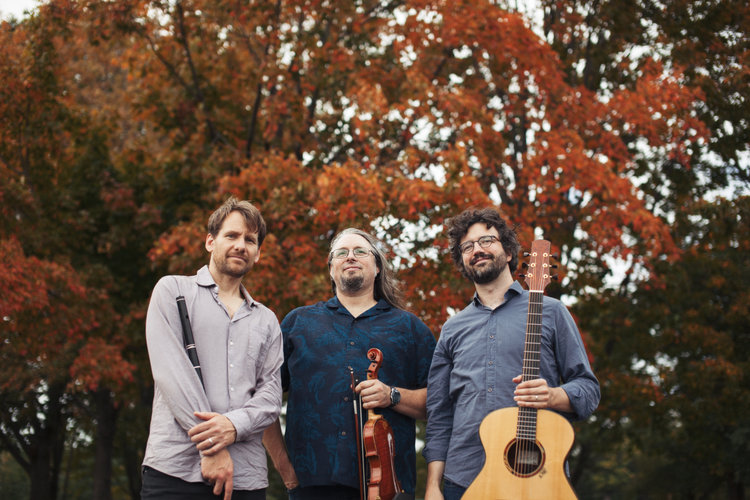 With multiple Canadian Folk Music Awards, as well as Juno and ADISQ nominations, GENTICORUM have earned a reputation as a leading voice in the evolution of Québécois traditional music.

For over twenty years, the trio has earned a place of privilege on world, traditional, folk and Celtic music stages. Known for their unbridled energy, their musicianship and their magnetic stage presence, the trio has won over audiences at such prestigious events as Celtic Connections in Scotland, the Tønder Folk Festival in Denmark, the National Folk Festival in Australia, the Independent Music Festival in Alexandria, Egypt, the Rain Forest Festival in Malaysia, as well as countless venues across North America.

Pascal Gemme (fiddle) and Yann Falquet (guitar), the group’s two founding members, are both recognized individually as major contributors to the trad music scene in Québec. Since 2015, they have been joined by accomplished multi-instrumentalist and composer Nicholas Williams (flute, accordion). Weaving intricate fiddle, flute and accordion lines, gorgeous vocal harmonies, subtle guitar textures and exhilarating foot percussion, the pleasure that these three musicians have creating and playing together is palpable, both in the studio and on the concert stage.

This concert is part of the Peaks Island House Concert Series. The Series was started by Ellen Mahoney and Ed Daranyi, with the goal of bringing world class acoustic roots musicians to Peaks Island for the sheer joys of sharing something beautiful with the world.

Suggested donation $20.00 under 18 and over 80 free. Kids need to attend with adult friends or family. Visit our website for more info / events: https://wharfcovefarm.wordpress.com/?fbclid=IwAR3hpg6iPHR4uhpFnm2YFO3wj7FcpXn01wSTfb3nADOPCFT73Qx6CKXpfVo